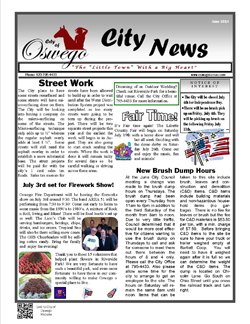 Superintendent Jurgensen plans to have some streets resurfaced and some streets will have the microsurfacing done on them. The Micro-surfacing technique only adds up to ½” whereas the regular asphalt overly adds at least 1 ½”.
Some streets will still need the asphalt overlay in order to establish a more substantial base. The street projects will be paid for with the city’s 1 cent sales tax funds. Sales tax monies for streets have been allowed to build up in order to wait until after the Water Distribution System project was completed as too many streets were going to be torn up during the project. Supt. Jurgensen said that there will be two separate street projects this year and the earliest the work will begin is in August.

They are also going to start crack sealing the streets. Where the work is done it will remain tacky for several days so to be careful walking or driving across these areas. Read more in this newsletter.