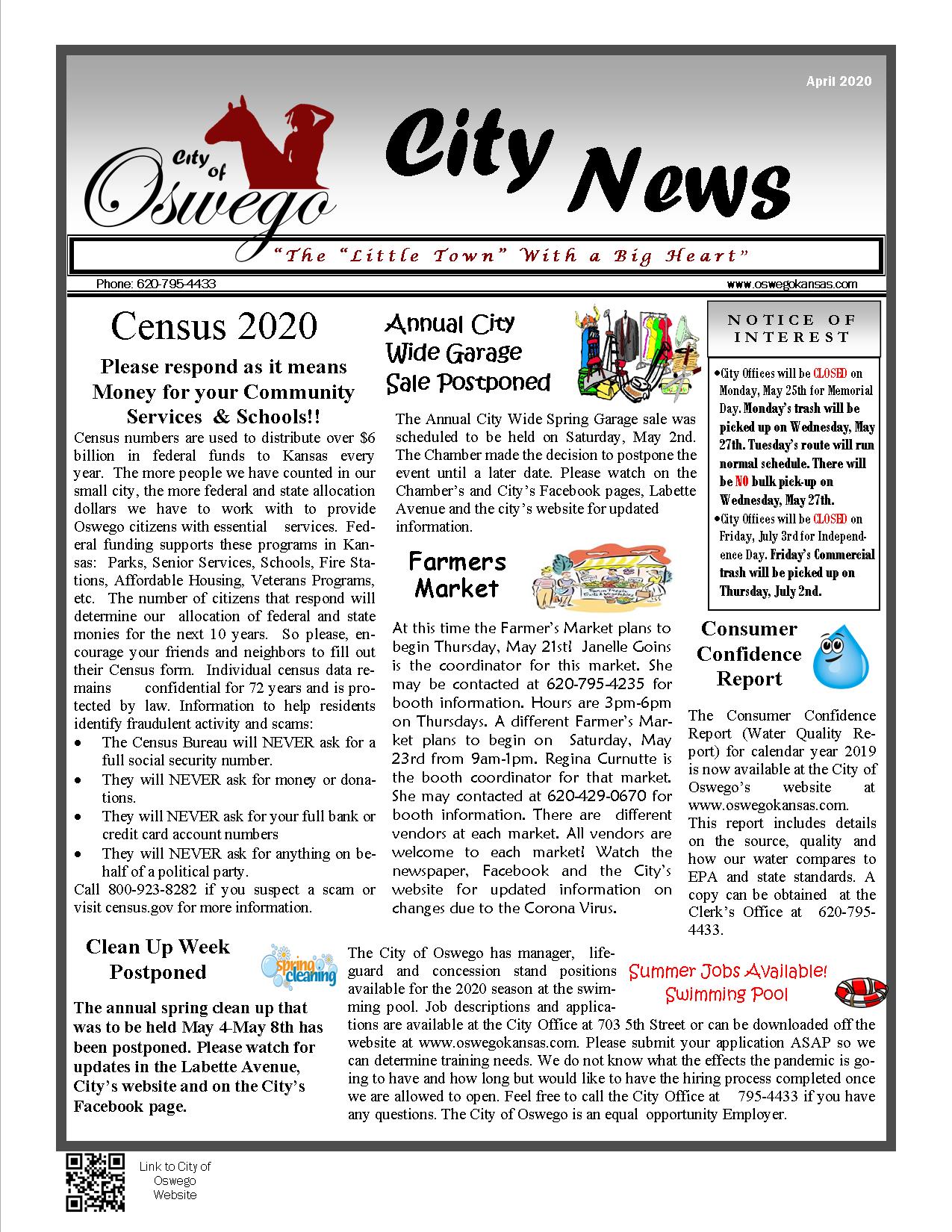 The Annual City Wide Spring Garage sale was scheduled to be held on Saturday, May 2nd. The Chamber made the decision to postpone the event until a later date. Please watch on the Chamber’s and City’s Facebook pages, Labette Avenue and the city’s website for updated information. 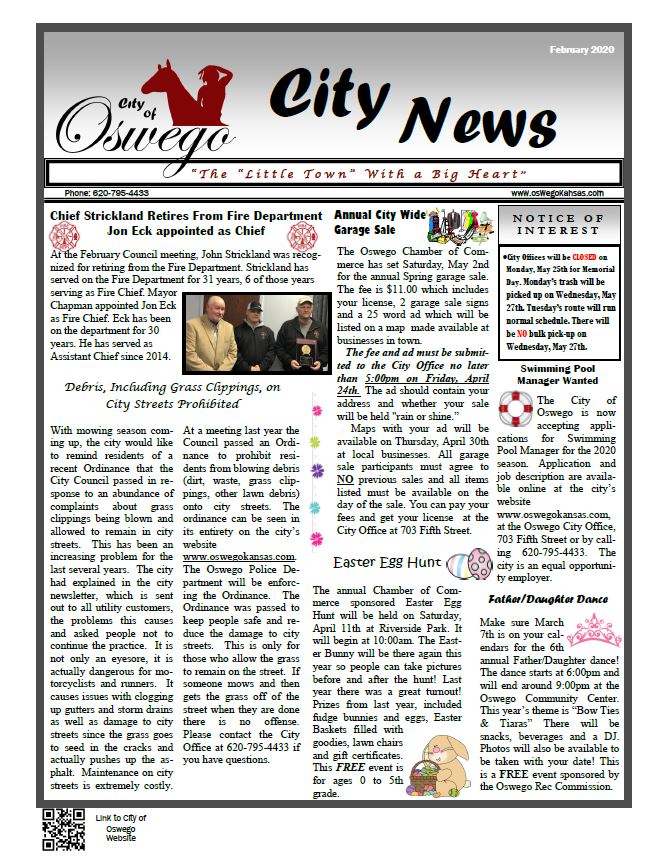 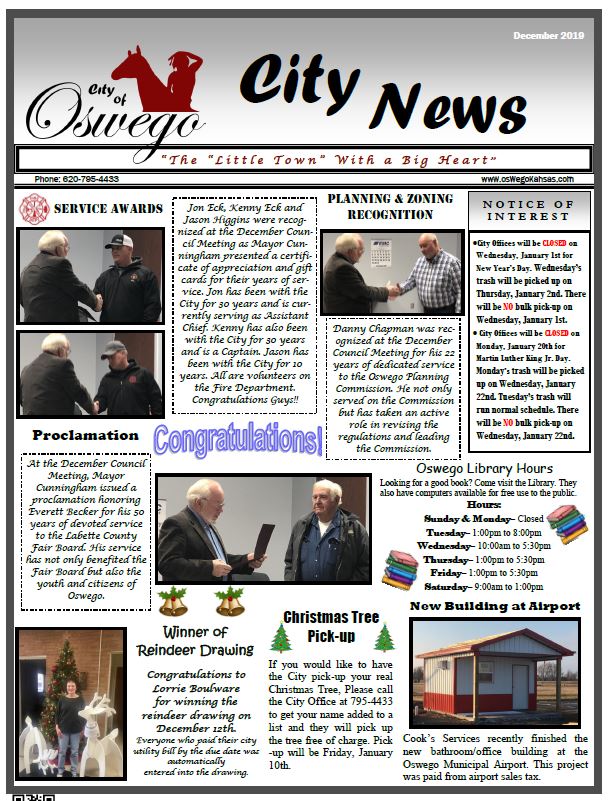 Dog and Cat tags for 2020 are now available for purchase at the City Office. Your current 2019 tags will expire April 1, 2020. The cost is $2.00 if your pet is spayed or neutered and $5.00 if they are not. You must present a rabies vaccination certificate at the time of purchase in order to obtain a city tag. The Oswego Veterinary Clinic and Regional Veterinary 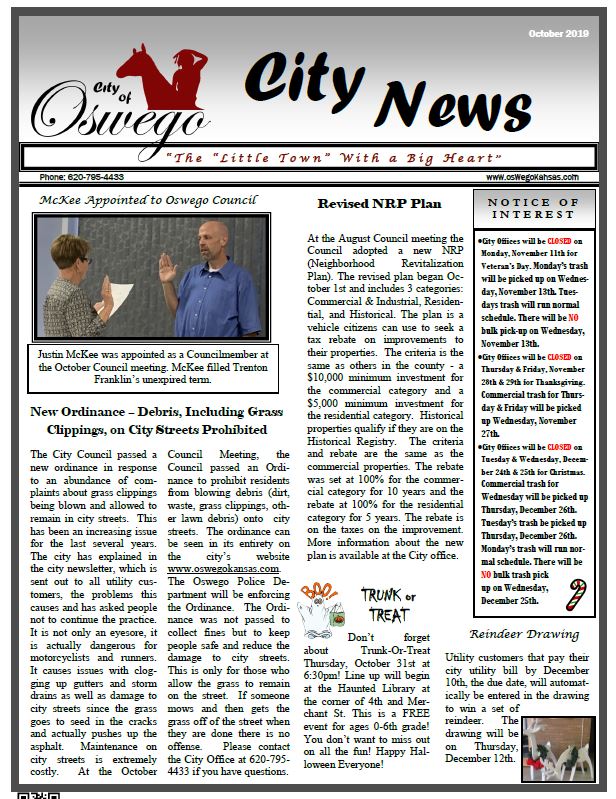 The City Council passed a new ordinance in response to an abundance of com-plaints about grass clippings being blown and allowed to remain in city streets. This has been an increasing issue for the last several years. The city has explained in the city newsletter, which is sent out to all utility customers, the problems this causes and has asked people not to continue the practice. It is not only an eyesore, it is actually dangerous for motorcyclists and runners. It causes issues with clogging up gutters and storm drains as well as damage to city streets since the grass goes to seed in the cracks and actually pushes up the asphalt. Maintenance on city streets is extremely costly. At the October

Council Meeting, the Council passed an Ordinance to prohibit residents from blowing debris (dirt, waste, grass clippings, other lawn debris) onto city streets. The ordinance can be seen in its entirety on the city’s website www.oswegokansas.com. The Oswego Police Department will be enforcing the Ordinance. The Ordinance was not passed to collect fines but to keep people safe and reduce the damage to city streets. This is only for those who allow the grass to remain on the street. If someone mows and then gets the grass off of the street when they are done there is no offense. Please contact the City Office at 620-795-4433 if you have questions.